...the Requiem was august. Its majesty, though, came to fruition in Evan Boyer’s opening Tuba mirum. Boyer has an astonishing breadth as a bass singer, tapping into a sound that verges on profundity.
​-Bachtrack Houston 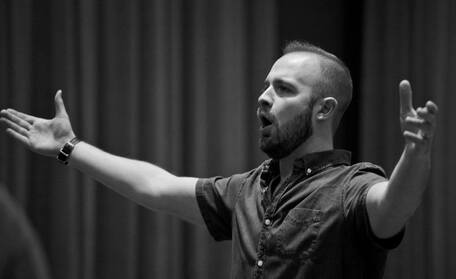 In rehearsal as Sarastro with Pacific Symphony.
Praised for his "voluminous bass, deep and eloquent" (South Florida Classical Review), and as "an uncommonly vivid singing actor" (Opera News), American bass Evan Boyer has performed with some of the most prominent operatic and orchestral organizations, conductors, and directors, both nationally and internationally. Since graduating from the Lyric Opera of Chicago's Ryan Opera Center in the spring of 2013, Mr. Boyer has performed with the Atlanta Symphony Orchestra, Cleveland Orchestra, Dallas Symphony Orchestra, Chicago Symphony Orchestra, Houston Symphony, Canadian Opera Company, LA Opera, Seattle Opera, Cincinnati Opera, Palm Beach Opera,  and many others. He has collaborated with such artistic luminaries as Seiji Ozawa, James Conlon, Robert Spano, Franz Welser-Möst, Jaap van Zweden, Johannes Debus, and Sir Andrew Davis.

In 2017, Evan made his Kennedy Center debut with the Atlanta Symphony Orchestra in performances of Creation/Creator, after having revived the work in Atlanta. He also appeared in recital with Robert Spano and the other soloists from Creation/Creator in a National Gallery performance entitled "Songs on Creation." In the spring he performed Beethoven's 9th Symphony with the Southwest Michigan Symphony Orchestra, and made his debut with the Kalamazoo Symphony Orchestra as both the Commendatore and Masetto in Don Giovanni. In the fall he sang Truffaldino in Ariadne auf Naxos and Warden Benton in Dead Man Walking, both with Kentucky Opera. He then returned to Lexington to perform Messiah​ with the Lexington Baroque Ensemble at Christ Church Cathedral.

2016 highlights included a debut with Cincinnati Opera as Angelotti in Tosca, a recital for the Kentucky Governor's School for the Arts, and Messiah with the Lexington Baroque Ensemble. In 2015, Evan performed Ramfis in Aida and Lo Zio Bonzo in Madama Butterfly with Wolf Trap Opera; returned to the Atlanta Symphony Orchestra for the world premiere of Christopher Theofanidis's Creation/Creator with Robert Spano; debuted in Mozart's Requiem with Jaap van Zweden at the Dallas Symphony Orchestra, both in Dallas and at the Bravo Vail Festival; sang Armchair/Tree in  L'enfant et les sortilèges with Seiji Ozawa on tour in his Ongaku-Juku Festival in Japan; and performed Colline in La bohème with Palm Beach Opera.

Performances in 2014 included Messiah with the Jacksonville Symphony; a return to the Houston Symphony in Mozart's Requiem with Andrés Orozco-Estrada; Evan's debut as Masetto in Don Giovanni with Seattle Opera; a concert performance of Salome with the Chicago Symphony Orchestra under James Conlon at the Ravinia Festival as Second Soldier, Cappadocian, and the Fifth Jew; the King in Aida with the Atlanta Symphony Orchestra under Robert Spano; Pulcinella and Beethoven's Mass in C with the Houston Symphony; and Samuel in Un ballo in maschera with Canadian Opera Company.

In 2013, after graduating from Lyric Opera of Chicago's Ryan Opera Center, Evan debuted with Canadian Opera Company in performances of Salome and Dialogues des Carmélites; sang Colline in La bohème at the Teatro Nacional in the Dominican Republic; returned to Lyric Opera of Chicago for Lodovico in Otello, as well as their Stars of Millennium Park concert as Raimondo in an extended excerpt of Lucia di Lammermoor; and debuted with LA Opera as Sarastro in Die Zauberflöte with James Conlon.

During Mr. Boyer's three-season tenure in Lyric Opera of Chicago's Ryan Opera Center, from 2010-2013, he was involved in seventeen productions. He performed the roles of Sarastro in Die Zauberflöte, the King of Egypt in Aida, Pietro in Simon Boccanegra, Zuniga in Carmen, Luther in Les contes d’Hoffmann, and Count Ceprano in Rigoletto, and also appeared in productions of Die Meistersinger von Nürnberg, Ariadne auf Naxos, Boris Godunov, La bohème, La fanciulla del West, Lohengrin, and Macbeth. He covered in eleven productions, including Raimondo in Lucia di Lammermoor, Sparafucile in Rigoletto, Theseus in A Midsummer Night's Dream, and Sam and Tom in Un ballo in maschera.

Other performances in 2012 included a debut with The Cleveland Orchestra as the First Nazarene and First Soldier in concert performances of Salome at Severance Hall and again at Carnegie Hall, a recital in his home state of Kentucky for the Governor’s School for the Arts, and a concert performance of Act I of Così fan tutte with the Grant Park Music Festival as Don Alfonso.

In 2011, Mr. Boyer made his UK debut as Sarastro with Garsington Opera, debuted with the Alabama Symphony in Bach’s Cantata No. 82, and returned to Chicago Opera Theater to sing Créon in Charpentier’s Médée, where he made his professional debut in 2010 as Oreste in Cavalli’s Giasone.

Mr. Boyer received his Master of Music in Opera from the Curtis Institute of Music, where he was heard as Enobarbus in Antony and Cleopatra, Conte Rodolfo in La sonnambula, Leporello in Don Giovanni, King René in Tchaikovsky's Iolanta, Doktor in Wozzeck, Trulove in The Rake’s Progress; Barone Trombonok in Il viaggio a Reims, Bartolo in Le nozze di Figaro, and José Tripaldi in Golijov’s Ainadamar. Mr. Boyer was a member of San Francisco Opera’s Merola Opera Program in 2009 where he was featured in the Schwabacher Summer Concert and covered Don Alfonso in Così fan tutte. A member of the Tanglewood Music Center in 2008, he sang Alaska Wolf Joe in The Rise and Fall of Mahagonny and Captain Petrovich in Eugene Onegin. He received his Bachelor of Music in Vocal Performance from Northwestern University, where he performed Don Alfonso in Cosi fan tutte and Prince Gremin in Eugene Oengin, and attended the Chautauqua Institution in 2006 and 2007, where he appeared as Don Alfonso in Così fan tutte and Seneca in L'incoronazione di Poppea.